When to go Ice Fishing?

A couple of weeks ago, a couple of friends decided to take a drive out to the local reservoir, where they spend days ice fishing for perch, crappie and pike, to see how thick the ice was. It was early in the season, the second half of December, and they didn’t expect to be on the ice any time soon. They brought along an auger and a tape measure, lifting their hopes a little that this year might be different. After parking on the dirt road at the trail head which leads through the second growth forest out towards the lake…

WATCH:  How Thick Should Ice Be For Ice Fishing?

Upon arriving, they noted that the marsh areas of cattail along the shore was soft and slushy. Their hopes dropped quickly. they continued to push through the reeds though, and made it out to the open, on the ice. Two feet off shore they drilled their first hole. Surprise! The ice here was already five inches thick. Very promising. They decided to take a few steps out further, and drilled another hole. Here the ice was still five inches thick. They continued moving out, drilling a hole every few paces and checking the thickness. Needless to say, everywhere we drilled the ice was at least five inches thick. We were out on the ice within a couple of days for some early season perch. The bite was slow, but the itch was scratched!

IMPORTANT! Ice conditions are constantly changing. Always check with local ice hut operators before heading out on any ice surface. 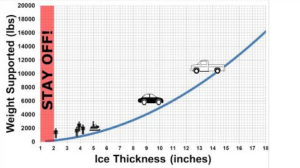 ***REMEMBER THAT THESE ARE ICE THICKNESS GUIDELINES FOR NEW, CLEAR, BLACK ICE. MANY OTHER FACTORS COME INTO PLAY WITH ICE AND ITS THICKNESS

Some Ice Fishing Q & A