Looking at the Stars – Part 2

What lights the night? In more natural settings, as the sun drops below the horizon, the moon’s reflection as all that bathes the landscape in a soft, dim glow. However, in more urban areas, the glare of the artificial light dominates, threatening the age old pastime of night sky viewing. Generations of young people are growing up missing the splendour of what lies above them as dark skies become increasingly rare or inaccessible. In the Haliburton Highlands we are lucky to be able to look up on any given cloudless night and take in the bounty of celestial objects without the diluting effects of artificial light.

Being less than 2 hours from Toronto, the Haliburton Highlands is the closest geographical area in the bottom third of the light pollution spectum, and Algonquin Provincial Park is in the Dark Gray (second on the scale for least light pollution).  Haliburton Forest and Wild Life Reserve has an observatory and planetarium built to offer dark and unobstructed views of the night sky, you can discover the secrets of the stars surrounded only by the sounds of nature. On clear nights, watch the sky come to life as you gaze through telescopes, or spend cloudy nights inside the planetarium, immersed in the myths, ancient stories of constellations, and historical cultures that viewed the skies as a realm filled with magical powers.

What does the color scale on the light pollution map actually mean? 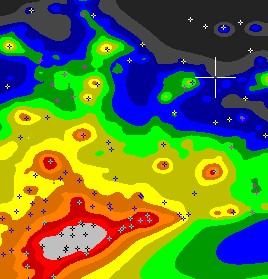 There are 15 colors found on the map.  Light pollution limits the visibility of milky way to the unaided eye, the visiblity of nebulae and galaxies seen in telescopes.  Low light pollution conditions, or dark skies, is one of the most important properties of a good astronmical observing site.

This map is a small exerpt (175Km east-to-west, by 200Km north-to-south) from the Light Pollution Atlas 2006 by David Lorenz. David recalculated the The World Atlas of the Artificial Night Sky Brightness with newer data.

The central cross marks the location of the Haliburton Scout Reserve clear sky chart. Tiny crosses mark other charts. This map assumes an observer at sea level. A real observer should see a slightly darker sky.

Other links of interest

The Night Sky – Darker is Better by Rick Whitteker

Looking at the Stars – Part 1