Sharing some of the past 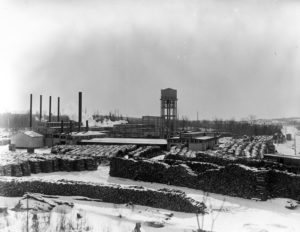 It may be hard to imagine what Haliburton was like when lumbering was at its height, but what about Donald? Richard Donald came to Dysart around 1908 and set up operations for the Wood Products Company of Canada. By 1915, the operation had been taken over by the Standard Chemical Company,leading to the creation of an impressive little company town, which included a boarding house, workers’ houses, a shop, post office and community hall. The operation produced charcoal, wood alcohol and various other products, which, as you can see, required vast quantities of lumber! 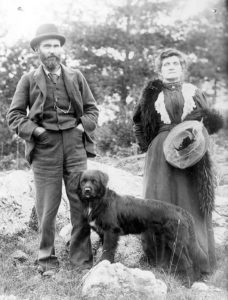 You can’t tell the story of Haliburton’s history without talking about the remittance men. Often they were from very well-to-do families and were sent away to Canada with a regular allowance because they had embarrassed the family in some way. Theophilus (Ophy) Bellairs, shown here with his wife Mary, was known in the community for his quirks. Many of the stories to do with Ophy involve near misses, due to his poor eyesight, but one which always makes us laugh has to do with a trip he took to Toronto. Reputedly, when he got off the train, his cabbie and asked, “King Edward, sir?”, meaning the hotel, and Ophy replied, “Oh no, just Theophilus Bellairs from Haliburton.” 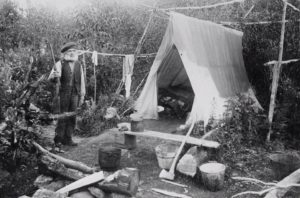 There are so many interesting individuals who make up our community’s history, but one person who people seem to be consistently curious about is Billy Elstone. He was best known locally as a trapper, guide, hunter and fisherman, though he did also farm for a time on the shores of Lake Kashagawigamog. You can see Billy in this picture at one of his campsites, likely in the vicinity of Drag Lake.